This web site is maintained by John Bundy Productions © Copyright 2016. All rights reserved.
No portion of this website may be copied, distributed, manipulated or posted without prior written consent from the creator of illusionbiz.com. Use of this website indicates understanding of this statement. The information contained on this and all accompanying pages are subject to change without notice.
Contact:
Phone: (908) 756 7030
Email: info@illusionbiz.com

John Bundy and Morgan have e dazzled audiences around the world with imaginative presentations of theatrical Illusion. For over 25 years they have toured throughout the United States and Asia, appearing at resorts and entertainment destinations including Atlantic City appearances at Trump Plaza, Tropicana and at Resorts Casino Hotel. They have worked with corporate clients to bring magical presentations to their meetings and marketing events of Sherwin Williams, WGN network, Bradley Caldwell, Toys R Us and Universal Studios.

Known for creating themed magic and illusion, Bundy and Morgan have produced magic shows for Six Flags, Busch Gardens and Cedar Fair amusements parks across America. Every October, their Spooktacular show filled Kansas Citys Tivoli Music Hall for an unprecedented 20 years. In New Jersey, Bundy has been a fixture on Long Beach Islands Fantasy Island as the illusion show in residence for 30 years.

John and Morgan have been recognized by the magic world with cover stories and feature articles in the industry periodicals: Magic, Magic Manuscript and Laughmakers magazine.

In 2010 they appeared in the Paramount Pictures "Morning Glory" which starred Harrison Ford and Rachel McAdams. That same year, Morgan was named "Escape Artist of the Year" on "The World Magic Awards" TV special.

Their additional television credits include two appearances on The Late Show with David Letterman, Rachael Ray Show and Ricki Lake Show. While on tour in China, Bundy and Morgans televised performance was seen by an estimated audience of one billion people. Behind the cameras, illusions and coaching was provided for a magic episode of "Law and Order Criminal Intent", Americas Got Talent, Gotham,
and Best Time Ever with Neal Patrick Harris.

About John Bundy and Morgan 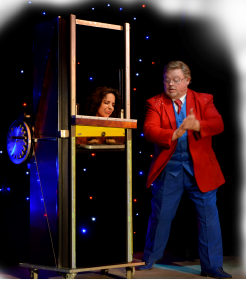